I'm troubleshooting a Microsoft mail server. I go through the logical process of realizing that unless Crazy Monkey Man has put some sort of voodoo magic on my server box there must be a good reason why a Microsoft product isn't working. *cough*.

Right, I telnet onto the server, authenticate myself and try sending a "mail from:" command. I get the error message "452 4.3.1 Out of memory" which I assume means I'm out of memory. So I check my server memory to see that it still has 2 gig free and is under no heavy load right now.

Hmm, how could an SMTP service demand 2gig of RAM I wonder? Not even Microsoft would be so daring to put a hardware requirement like that. 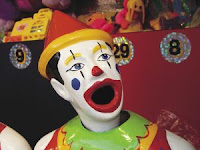 The truth is that when Microsoft says that you're "Out of memory" what they actually mean is that you don't have write privileges to a particular folder (click here if you don't believe me). They just say you're out of memory to trick you. Sort of like Microsoft's idea of a friendly joke.

Only problem is that I *do* have write privileges on the folder in question.

Further investigation reveals that Microsoft has two seperate documents on this issue and the error message "Out of memory" can actually mean one of three things. None of which involve memory. Click here if you don't believe me.

Haha, good one Microsoft. I bet you're laughing all the way to the bank with your little prank.
at 15 February No comments: