For something to be truly awesome, it must be "web scale" right? The rather excellent video just below shows how hype can blind us to the real values of a technology. It's quite a famous trope in some circles and I think is a useful parallel to the excitement about blockchain.

In it an enthusiastic user of a new technology repeats marketing hype despite having no understanding of the technical concerns involved. Watch the video and you'll hear every piece of marketing spin that surrounds NoSQL databases.

I usually get very excited about new technologies but I'm quite underwhelmed by blockchain. In the commercial context I see it as a great solution that really just needs to find a problem to solve.

Lots of companies are looking for the problem that the blockchain solution will solve. Facebook has a blockchain group that is dedicated to studying blockchain and how it can be used in Facebook.

They don't seem to have found a particularly novel use case for it and appear to be set on using it to launch a Facebook crypto-currency. This would let Facebook track your financial transactions (https://cheddar.com/videos/facebook-plans-to-create-its-own-cryptocurrency) which to me sounds like juicy information to sell to advertisers.

I'm convinced that when we finally find that problem blockchain will be a godsend, but right now outside of cryptocurrency I'm struggling to see how the cost and risk of blockchain is worthwhile in the commercial context.

Blockchain offers a distributed ledger system, which sounds like something we want right? Everybody can look at the list of transactions at any time, and verify that a particular transaction is genuine.

Using boring traditional data services you'd be forced to have a database and expose an API that lets authenticated users access it in ways that you directly control. How dull is that!

Like communism, decentralizing control of data is a great idea because it promotes equality and encourages distributed effort focused on the greater good. Capitalists and other realists will point out that it's not machine learning algorithms that will be the oil of the future, it's data. Facebook isn't worth billions because it has clever algorithms, but rather because it controls data about people. Data has value, are you sure you want to give it away?

Broadly speaking, instead of your company having a private database that it controls access to, you're able to have a shared database that you can only control the contents of if you spend more on hardware than the rest of the world.

Wait, what? Your blockchain consultant didn't explain to you that anybody with a botnet is going to be able to rewrite your public ledger?

Well it's true. The way that blockchain works means that the record is only immutable if there isn't an actor who controls more than 51% of the processing power in the network.

If you have a private blockchain you're going to need to be certain that you can throw enough resources at it to prevent malicious actors from rewriting history. Or you could only allow trusted actors to use your blockchain, which sounds very much like a traditional access method.

Who will mine your blocks?

The most popular use for blockchain (by far) is to provide a ledger for currency, like Bitcoin and the other coins out there. When users mine the blockchain they are rewarded with coins which ultimately they hope to be able to convert into fiat currency or material goods/services at some point. There is a direct incentive to spend money on electricity to crunch the numbers to verify Bitcoin transactions.

If you build your own private blockchain who is going to mine the blocks? What is the value in them doing so and are you going to end up mining the blocks yourself just to get the transactions processed? How is this cheaper than a traditional database?

Given the problems with immutability it should be pretty clear that a private blockchain is a pretty risky way to avoid boring traditional data-sharing approaches like an API. And of course that's assuming that there will be people wanting to mine your blocks.

Blockchain lets you dispense with traditional signed contracts with suppliers and rather enter into digitally signed contracts. They're touted to replace lawyers (https://blockgeeks.com/guides/smart-contracts/).

Smart contracts cut out the middle-man when it comes to transferring goods and services. They're an alternative to conveyancing costs, credit-card processing fees, escrow costs, and so on. Essentially you place the asset into the trust of the computer program which will then decide where to transfer it depending on whatever conditions you program into it.

Instead of placing your house into escrow with a lawyer who is bound by professional conduct rules and has an insured lawyer's trust fund you can use a smart contract written by anybody. That's the democratizing power of blockchain! 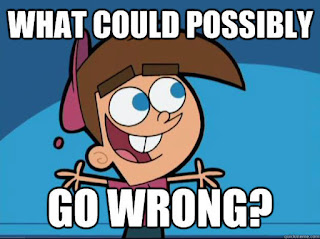 Who can forget about the Ethereum fork which happened because of faulty code in a smart contract? I'm not nearly arrogant enough to assume that I can code tighter code than the guys and girls who created the DAO - are you willing to bet your house that you are?

I am horribly unfair

Maybe it's not fair to use a high value asset as an example for considering a smart chain. What about other use cases touted by blockchain evangelists?

Blockchain supposedly streamlines business decisions by eliminating back-and-forth decision making. A smart contract can simply have the business rules coded into it so instead of seeking approval from humans you can just rely on the contract to grant your request.

That contract won't work for requesting a new monitor for your workstation though. You'll need a different contract for that. Or maybe you can extend the old contract and just add more rules to it?

Given the rate cards for blockchain developers very simple administrative decisions can end up taking a lot more coding effort (and money) than you really need to be dedicating to simple decisions. And what happens if a management decision needs judgment that hasn't been coded?

Barclays sees a future where identity theft is impossible because digital identity is immutable and publicly accessible for them to read and share with law enforcement. My financial records would be available to Barclays (and whoever else can read the blockchain) and they'd be able to make a decision about opening an account quicker than the time it currently takes (about an hour the last time I did it at the branch).

I wouldn't need to take my photo identity and proof of address documents to the bank, I would just need to show that I own the private key associated with the digital identity profile. This will prevent identity theft, according to Barclays, presumably because consumer computers are secure and digital keys can't be stolen.

Trade documents are given as a good example of how digital signing and identity can be accomplished with blockchain.

How do I know that wallet address 0xaa8e0d3ded810704c4d8bc879a650aad50f36bc5 is actually Acme Inc trading out of London and not Pirates Ltd trading out of Antigua? Who is responsible for authenticating the digital identities in blockchain?

You can trust the blockchain (as long as the hash power is evenly distributed) but can you trust the digital identities on it?

There are already established digital signing solutions that don't rely on snake-oil. I signed my rent agreement digitally in the UK with my landlords who live in continental Europe. I hardly think that this space is a raison d'être for block chain.

It seems that my beef is with the impractical nature of using private blockchain where existing solutions are more secure and cheaper. So, what about public blockchains, like Ethereum?

In a traditional blockchain each node on the network needs a full copy of the entire chain in order to be able to verify transactions. Without this public scrutiny the blockchain is no longer secure.

Ethereum is considering a sharding approach where they will decentralize the chain slightly in order to improve transaction speed. A few nodes on the network will have more authority than others. These nodes will need to have explicit trust in each other, and obviously the network will need to follow suit.

As a company do you want to commit to this level of trust? Who are the actors controlling these nodes? Who will they be in three years time? What countries laws are they bound by?

Data you put into the blockchain will be shared with everybody, forever. Governments don't like competition when it comes to spying on people and are passing increasingly strict privacy laws - how will you plan for compliance when you don't control your data?